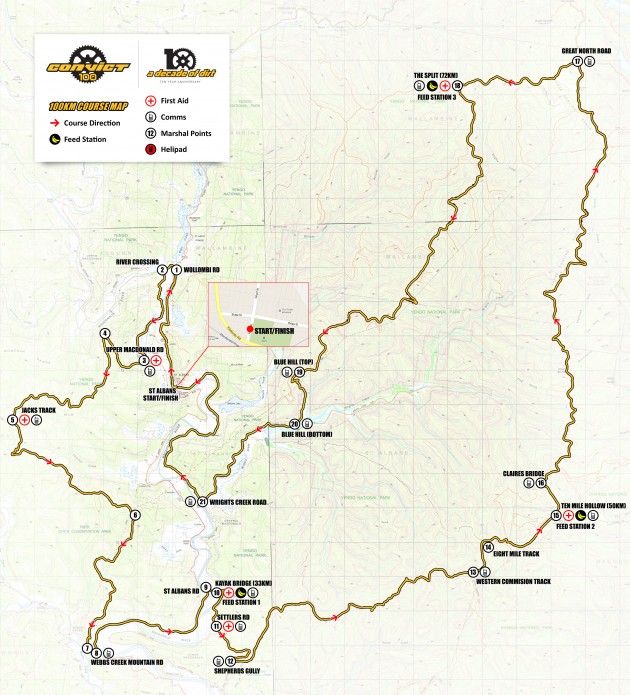 The 2015 edition of the Convict 100 will include a number of course changes.

“After celebrating our 10 year anniversary in 2014, it was time to introduce some new challenges to the regular Convict riders. The 100km was relatively easy, for many years we’ve been contemplating running the course in reverse which is what we are doing next year. This change will present a very different challenge to those familiar with the 100km course. For example, riding up Jacks Track in the first 15km will be very different compared to flying down it in the last 15km and tackling the rock gardens and rock drop-offs in the opposite direction along the Old Great North Road will require some renewed focus. It also means the two major climbs on the course will now come earlier in the piece.”

2015 will also feature an all new 68km course to replace the “Half Century” and a new 44km option for the “not so serious” novice mountain biker.

“In the early years of XCM events it was the 100km course that was getting the majority of entries. In the last few years the “half course” or 50km has seen the biggest number of entries sometimes making up two thirds of the participants. For this reason we are introducing an all new 68km course that will include the famous Convict kayak bridge and technical sections around Shepherds Gully and the Old Great North Rd. Although riders will have to cover a bit more distance the new course is a marked improvement and will present a much more diverse and challenging course to those wanting to race the Convict half”

The new 44km course has been earmarked as an entry level ride mostly made up of fire trail and dirt road sections. “Most beginner riders take up cycling and if they are disciplined in their training, can quickly build the endurance to cover 40 – 50km on a mountain bike. It’s is the ability to ride technical terrain that is often the stumbling block and takes more time to master. That is why we are introducing an easier 44km course option to give those novice riders a feel for racing, get them out on the dirt without any serious technical challenges. Having said that, the 44km is no cake walk with a 300m ascent in the first 15km and an opportunity to ride the kayak bridge. The perfect introduction to MTB racing.”